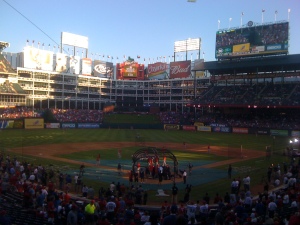 News broke this week that Josh Hamilton, the all-star outfielder for the Texas Rangers, had a “weak moment” on Monday night and consumed alcohol. In the world of professional sports, alcohol consumption is a foregone conclusion among both fans and athletes. However, Josh Hamilton’s story is different. After spending three years out of Major League Baseball for drug and alcohol abuse, Hamilton has publicly committed to avoiding alcohol. He readily acknowledges that he does things he regrets when under the influence of alcohol.

I am a huge Rangers fan. Hamilton is among my favorite players. My heart beats a little faster when Josh steps to the plate because I know he can change the face of the game with one swing of the bat. I’ll never forget watching his stellar performance in the 2008 Home Run Derby. His performance will most likely never be matched. He is one of the most talented players in baseball—and he plays for my team.

So what should we do when our heroes fail? What do we tell our kids who see their favorite player on the news? How do we respond when life throws this curveball?

First, we need to recognize that none of us are perfect. Scripture declares that we are all sinners (Rom 3:23). Despite our best efforts, we have no righteousness of our own (Rom 3:10–12). The difference between Hamilton and us is that our failures probably won’t make headlines. No one is watching our every move in order to report our faults on the local news. However, our sins—no matter how great or small—carry the same eternal consequences from God. We deserve death and hell for our sins whether or not we are anyone’s hero.

Second, we can rejoice that we can seek the forgiveness of God and those we have hurt just like Josh did. For over ten minutes in his press conference, Hamilton told what happened. He admitted his sin. He admitted his deception to his teammate. He admitted that he had hurt others. He admitted that he had let his fans down. He confessed that he needed forgiveness. He called upon God to help him. Josh took the biblical route on this one. He confessed his sin (James 5:16) and has set out again to change his behavior with God’s help (i.e., repentance). When we fail, we need to take the same path to repentance.

On opening day in April, I hope to be at Rangers Ballpark in Arlington cheering my favorite baseball team to victory. When Josh Hamilton steps to the plate, I will cheer for him to succeed. He is one of my heroes—I wish I could run, throw, and hit like him. However, he is not the object of my faith. He is a flawed human being just like me. I put my faith in Christ. I walk beside a fellow believer like Josh knowing that I have faults too, just not as public.

2 thoughts on “When Heroes Fail”