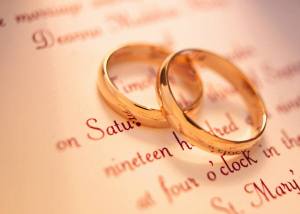 Marriage rates are rising according to an article published in USA Today this week. They report about an expected rise in marriage rates over the next few years after a progressive decline since the recession. The report from Demographic Intelligence of Charlottesville, VA, predicts a 4% rise in the number of weddings over the low point in 2009. From 2007 to 2009, the number of marriages in the United States dropped from 2.197 million to 2.080 million. Demographic Intelligence projects that the number of marriages will rise to 2.208 million by 2015.

While the article analyzes the total number of marriages per year, I think the more interesting details involve the types of people who are getting married. The study notes that the boost in marriages will come mostly among “the better-educated and affluent and women ages 25-34.”

It is no secret that marriage is quickly becoming the domain of those with higher levels of education. Education also generally brings with it a certain level of affluence. Therefore, it is no surprise that these two demographics factor into the rising marriage rate.

Unfortunately, those with lower levels of education–and typically less likely to marry–do not realize that marriage is one of the most effective routes to increasing affluence and higher education levels among subsequent generations. Thus, the ones who can benefit the most from marriage are still retreating.

It is also interesting to note that the age demographic of 25-34 year old women is part of the increase. The average age of first marriage for American women has increased to nearly 27 years old (29 for men). The fact that the younger generation is driving the increase is also good news.

One of the most direct impacts of delayed marriage is fertility, and it seems this has caught the attention of younger women. Andrew Cherlin, director of the Hopkins Population Center at Johns Hopkins University, states, “If you’re going to get married in time to have kids, you can’t wait forever, so they may be saying that the postponement of marriages is running its course, and a backlog of young adults is about to schedule their weddings.”

So why should we care about this? How does it affect the church? The delay in marriage has not left the church unscathed. Many of our young people have adopted the same philosophy of the culture and have delayed marriage. As a result there are fewer children in our congregations.

In addition, a rising rate of cohabitation has accompanied the decline in marriage. Many Christian young people have also adopted this “trial run” for marriage approach. It has begun to create a crisis of morality in our churches as fewer young men and women view pre-marital sex as a violation of biblical sexual ethics. For this reason, we should be grateful for an increase in marriage rates.

However, this good news should not make us complacent. Marriage is a fundamental building block of society. We should encourage and promote it. Each generation faces its own challenge to marriage, and we need to prepare this and subsequent generations of Christians to view marriage as the gift that God has given us to build society, bear children, and rear the future generations.